Check out: syajiesilat.blogspot.com for more!!

Posted by Sweet Serenity at 2:26 PM No comments:

Syajie's daring stunt at the pool.

Posted by Sweet Serenity at 8:06 AM 2 comments:

A family member was remanded a few weeks ago in Gemenchih; accused of four gruesome murders of his own kith and kin... In a society contingent on love and affection, especially for your own family members, it is unfathomable that such a tragedy can proliferate in our country. The massacre wistfully reminded me of a similar piteous incident that befell a student in the incipient years of our academy in USA.

University City as we knew it and embraced it, was the abode for two esteemed universities, namely Drexel University and University of Pennsylvania. As silat was a relatively new art in this particular academic city, we were fortunate that Malaysian students from both universities facilitated the introduction of the art by forming a Silat Club thus enabling us to use varsity facilities to promote and teach the art.

Among the many students who vetted the classes and ultimately signed up for class, was a young boy who was about 15. I got to know his mom who was a relatively new Muslim and was vehemently trying to steer her children in the right direction. Philadelphia in the early nineties was home to over 40,000 muslims but from various denominations. So it didn't come as a surprise to me that this particular mom was a little flummoxed as to which denomination she was supposed to subscribe to. But in my husband and I she found comfort and solace and as her son became part of our silat family, she was only too glad that finally there was someone that she could lean on, not just for spiritual support but for friendship as well.

One evening, I sat beside her as usual but this night she was a little agitated and was a little upset when the class didn't end exactly at 9pm. I tried to assuage her anxiety and told her to give it another 10 minutes or so. And just as class was dismissed, she quickly whisked her children out of the studio. Later that night, as I was about to perform Solatul Isha, she called and asked to speak to my husband. As he was busy at that time, I told her to call back but she said that she wanted my husband to teach her the recital of Ayatul Kursi and asked if we could record it in a cassette for her. Of course! I told her and promised to get it done as soon as possible.

Two days later, quite early, as I recalled, her son had called us to say that he can't attend class in the evening. As it was still early, I told him not to worry about it and I would relay the message to my husband. Thinking that it was the end of the conversation, I gave my salams and was about to hang up when he added with the most apparent difficulty, "My mom was murdered last night." I was stupefied and trembling from head to foot. I could not believe what I was hearing, hoping that it was a ghastly joke... In baited breath, he told us that his mother was stabbed 21 times by her live-in-boyfriend!! He courageously went to her aid when he heard her screaming in the master bed room upstairs but was stabbed twice in the melee. When the police finally came, the boyfriend was still stabbing her and they had to shoot him twice before he succumbed to his bullet-wounds.

A grotesque picture formed itself with dreadful clarity as we arrived at the house within fifteen minutes after receiving that phone call. I remembered how weak my knees were as I steeled myself to enter the house. A sense of insufferable gloom pervaded as we made our way into the living room. My stomach clenched as I see four or five of his younger siblings sitting in the corner, most with their arms around their knees, rocking themselves back and forth, shell-shocked. Other family members sat in silent and solemn repose. I didn't know what to say to them. She was grievously violated in one of the most appalling ways imaginable and their calmness spooked me....If a member of my family was brutally murdered, the scene would certainly be a little more palpable!!

Their biological father was being summoned but no one knew when he would come for them. Meanwhile, we looked around the room and none of their relatives would take care of them as they had their hands full. My husband and I looked at each other and before we knew it we were assigning rooms for them in our own house! At that time we had rented a 7 bedroom three-story house and had more than enough rooms to accommodate them. We just wanted them out of their house even though it would be impossible to consign to oblivion the images that are now, without a doubt, already indelibly imprinted in their young, innocent minds. They are obviously too young to fully grasp the nature of the unspeakable brutality that just befell their mother.

In the following days, word of the gruesome murder hit the streets and the outpouring of sympathy was immense but not unexpected. The muslim community banded and ensured that the family was given whatever was needed to overcome this horrific tragedy. I learnt a few days later that the boyfriend was overtly possessive and abusive. That explained her anxiety each time the class was late in ending. I tried not to blame the murder on her being late coming home from class that particular night but I was told that the boyfriend would get physically abusive if he got home before she did...

And as for my student, he went on to be a respectable martial artist in the community and helped us take many kids off the pestilential streets of West Philly...
Posted by Sweet Serenity at 12:35 PM 1 comment: 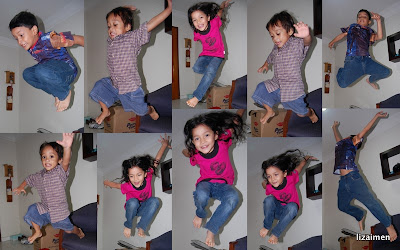 Awesome!! Step aside Michelle Yeoh and Jet Li...you've now got these kids to reckon with!!
Posted by Sweet Serenity at 3:21 PM 1 comment:

I only realized that it was 2010 when I was writing out receipts at the tuition center. I'd write 4/1/ ....and what the heck is the year now? It's 2010!! Where was I when everyone was ushering the new year? In bed, reeling from a you-name-it-I-had-it super fever that rendered me utterly useless for two whole weeks...

It started on the eve of Azril's wedding dinner at Dena's house. I knew I was in trouble when I could only look at the scrumptious offering of roast lamb and buttered prawns. My head felt like someone was hitting it with a big mallet, my throat was so constricted and swollen that made even the most mundane task of swallowing saliva an agonizing task... Then, inevitably came the dry hacking cough, runny nose and diarrhoea not to mention the body aches and muscle spasms thrown in for good measure...

So the following week was spent over-dosing myself on extra-strength everything from cough and cold medications, pill chi kit tek aun ~ the age-old remedy for diarrhoea, white panadol for muscle pains and pink panadol for PMS!! Half way into the first week of 2010 I was able to sober up and actually stand upright. Meanwhile poor Syajie had to fend for himself and fortunately he wasn't infected with the bug although he was throwing up all over me and hub for three whole days...Even then he was the tough one, fetching me water and popping pills into my mouth and making me open my mouth wide to make sure that I wasn't hiding those pills under my tongue...!

Nevertheless, one of my 2010 resolutions was to loose weight. Prior to Azril's wedding I was pumping myself up by watching The Biggest Loser...I was psyched..I'd dust off my elliptical machine and crank up my play list. Even had Am's kids who were here for the wedding excited as well, dangling a $50 carrot as to who could make me shed the jigglies... 7-10 kilometers every night for a whole week and dang! Didn't loose a single KG!! What was I doing wrong? Exasperation started setting in...Only consolation was for the wedding I was able to wriggle into the black kebaya which had been hanging in the closet for three years waiting for a moment like this...!

After the wedding, my appetite wavered...couldn't eat as much as I wanted to and all those medications had somehow either obliterated or singed my tastebuds. A few days ago I got on the scale and whadda you know...I've lost 3 kg's. Woohoo!! Guess being sick as a dog had a silver lining after all. If nothing else this is one resolution that managed to see itself through so early in the year and hoping that it'll be the precursor for the rest of my 2010 resolutions!! Happy New Year, everyone!!
Posted by Sweet Serenity at 8:37 AM 1 comment: